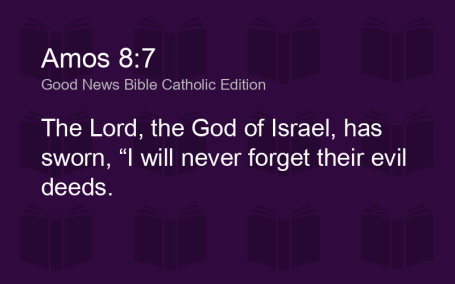 A Call to
Repentance

6   Go to the Lord, and you will live.
If you do not go, he will sweep down like fire
on the people of Israel.
The fire will burn up the people of Bethel,
and no one will be able to put it out.
7  You are doomed, you that twist justice
and cheat people out of their rights!
10  You people hate anyone who challenges
injustice and speaks the whole truth in court.
11  You have oppressed the poor
and robbed them of their grain.
And so you will not live in the fine stone houses
you build or drink wine from the beautiful
vineyards you plant.
12  I know how terrible your sins are
and how many crimes you have committed.
You persecute good people, take bribes,
and prevent the poor from getting
justice in the courts.
13  And so, keeping quiet in such evil times
is the smart thing to do!
14  Make it your aim to do what is right,
not what is evil, so that you may live.
Then the Lord God Almighty really will be
with you, as you claim he is.
15  Hate what is evil, love what is right,
and see that justice prevails in the courts.
Perhaps the Lord will be merciful
to the people of this nation who are still left alive.

A Call to Repentance

In this third message from Amos, he confronts the nation of Israel for their
lack of justice.
Instead of caring for the poor, they have taken advantage of them.
They have looked after themselves, but they have not looked after
each other.

This message feels so heavy and hard to hear.
And yet three times God issues an invitation to individuals within
the nation:
'Seek me and live' (5:4),
'Seek the Lord and live' (5:6),
'Seek good, not evil, that you may live' (5:14).
God wants anyone who will listen to him to love good and not evil.

He wants people who will be responsive to him.
For that remnant of his nation, he will be a God of mercy (5:15).

Amos here speaks a funerary lament which begins and ends with
wailing over the dead.
The chief mourner is God, who grieves over his unrepentant people
and still beseeches them to change their ways.

Israel had always been required by God to show mercy to the poor
and helpless (e.g. Exod. 22:21-27).
That was the requirement of the nation's relationship with people.
Instead of this, however, the situation in Israel, as described by
Amos, was rife with injustice, corruption and the suppression of
those who tried to be just (vs 10,13).

Bethel, Gilgal and Beersheba were shrines where Israel had long
worshipped, but its upper classes loved themselves rather than God.
Amos calls them back to life, real life; not the superficial
self-satisfaction of selfishness and greed, but the joyous contentment
of those who know God and who pour themselves out for others.

So the funeral draws nearer, but even in its inevitability there is
a glimmer of hope that perhaps, just perhaps,
Israel might heed the warning.

It may be that someone you know has rebelled against God
all their life; there may seem to be little time left for them
to change their ways; but keep hoping, keep praying,
keep reminding them of their need to 'Seek the Lord and live'.