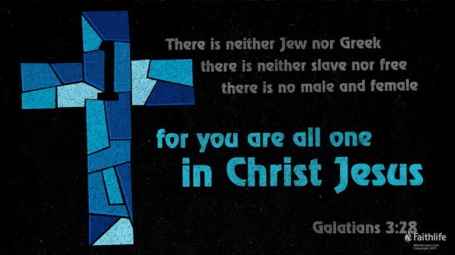 The Purpose of the Law

23  But before the time for faith came, the Law kept us all locked up
as prisoners until this coming faith should be revealed.
24  And so the Law was in charge of us until Christ came,
in order that we might then be put right with God through faith.
25  Now that the time for faith is here,
the Law is no longer in charge of us.
26  It is through faith that all of you are God's children
in union with Christ Jesus.
27  You were baptized into union with Christ,
and now you are clothed, so to speak, with the life of Christ himself.
28  So there is no difference between Jews and Gentiles,
between slaves and free people, between men and women;
you are all one in union with Christ Jesus.
29  If you belong to Christ, then you are the descendants of Abraham
and will receive what God has promised.

The Purpose of the Law

Before the Gospel of Christ came, we were held prisoners by the law.
To be held prisoner by the law and to be a prisoner of sin is the same thing.
Sin and the law work together to condemn us.

Because of man's sin, it was necessary that man remain under someone's control.
In Paul's day, wealthy families hired special tutors or custodians to look after their
children. The children were placed under the authority of the custodian.

In the same way, the law was put in charge of us;
it was our "custodian." Just as a custodian brings up the students under his charge,
so the law became our custodian to lead us to Jesus.

In Paul's time, a son did not receive his full rights and authority as a son until he
reached the proper age. Those who have placed faith in Jesus are like sons who
have come of age; they are now fully sons.

Paul says to the Galatian Christians: You are all sons of God -
whether you are Jew or Gentile, slave or free, male or female.

When we come of age and become full sons, we take off our old student uniform
and put on new clothes. In the same way, when we believe in Jesus,
we put on His righteousness.

This is the real meaning of baptism.
When we are baptised in Jesus' name, we put off our old sinful life,
our old self, and put on a new self, new spiritual life in Jesus

Think of the great difference there was in Paul's time between Jew and Gentile,
master and slave, men and women. The Jews despised the Gentiles;
slaves were crushed under the power of their masters;
men looked down on women, regarding them as inferior.

In Jesus, all became one.
As we each look about us within our own churches, do we see any of these differences?
Are those of low caste treated with the same respect as those of high caste?
Are women treated as respectfully as men?
Are there differences made between foreigners and nationals?

But such differences should not be. The church does not belong to one group
or another; it belongs to Jesus. Our citizenship is in heaven, not in this world.
If we allow any of these differences to remain in our churches,
we are guilty of dividing Jesus' body into pieces.

Jesus is the true seed (offspring) of Abraham.
Therefore, when we put faith in Jesus we also become true seed of Abraham.
We become heirs - co-heirs with Jesus.