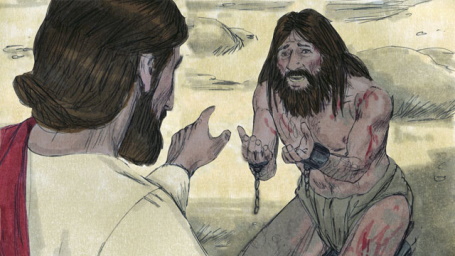 Jesus
Heals a Man
with Demons

26  Jesus and his disciples sailed on over to the territory of Gerasa,(a)
which is across the lake from Galilee.
27  As Jesus stepped ashore, he was met by a man from the town who
had demons in him. For a long time this man had gone without clothes
and would not stay at home, but spent his time in the burial caves.
28  When he saw Jesus, he gave a loud cry, threw himself down
at his feet, and shouted,
"Jesus, Son of the Most High God! What do you want with me?
I beg you, don't punish me!"
29  He said this because Jesus had ordered the evil spirit to go
out of him. Many times it had seized him, and even though he was
kept a prisoner, his hands and feet tied with chains, he would break
the chains and be driven by the demon out into the desert.
30  Jesus asked him, "What is your name?" "My name is 'Mob,'"
he answered - because many demons had gone into him.
31  The demons begged Jesus not to send them into the abyss.(b)
32  There was a large herd of pigs near by, feeding on a hillside.
So the demons begged Jesus to let them go into the pigs, and he let them.
33  They went out of the man and into the pigs. The whole herd rushed down
the side of the cliff into the lake and was drowned.
34  The men who had been taking care of the pigs saw what happened,
so they ran off and spread the news in the town and among the farms.
35  People went out to see what had happened, and when they came to Jesus,
they found the man from whom the demons had gone out sitting
at the feet of Jesus, clothed and in his right mind;
and they were all afraid.
36  Those who had seen it told the people how the man had been cured.
37  Then all the people from that territory asked Jesus to go away,
because they were terribly afraid. So Jesus got into the boat and left.
38  The man from whom the demons had gone out begged Jesus,
"Let me go with you." But Jesus sent him away, saying,
39  "Go back home and tell what God has done for you."
The man went through the town, telling what Jesus had done for him.

Footnotes
Luke 8:26 Gerasa; some manuscripts have Gadara
(see Mt 8.28); others have Gergesa.

Luke 8:31 It was thought that the demons were to be imprisoned
in the depths of the earth until their final punishment.

The Healing of a Demon-possessed Man

Jesus and His disciples again went across the Sea of Galilee -
to the region of the Gerasenes. Some manuscripts have "Gadarenes".
Gerasa was a town thirty miles from the eastern shore of the Sea of Galilee,
and the town of Gadara was six miles away from the shore.

Here again the demon recognized Jesus.
"What do you want with me?" the demon asked. In some Bible versions,
this is translated: "What do you have to do with me."

Let us remember that it is not enough only to recognize Jesus; the demons also
know and confess that Jesus is the Son of God.
Not only must we know Him; we must also love and obey Him.

The demon's name was Legion, (Mob) which is a Latin word meaning
a troop of six thousand men. The demon begged Jesus not to send him
and his fellow demons into the Abyss.

The "abyss" was the place where evil spirits were imprisoned
(Revelation 9:1-2; 20:2-3). The demons knew that Jesus would punish them;
therefore, they asked that their punishment not be severe.

The worst punishment demons can receive is to be sent to the Abyss,
where there are no bodies for them to live in.
Because demons cannot easily live outside a living body,
they asked to be allowed to enter a herd of pigs that was nearby.

When the demons entered the pigs, the pigs became wild and rushed down
a steep bank and into the lake. The owner of the pigs suffered great loss.
But two things are clear from this event.

First, one man is more valuable in the sight of God than many pigs.
A herd of two thousand pigs was lost, but at the same time
a demon-possessed man was made completely well.

When the people of the town came to see what had happened and saw Jesus,
together with the demon-possessed man sitting in his right mind, they were afraid.
They had come into the presence of God and experienced His awesome power.

Unbelieving men are always afraid when they come into God's presence.
The townspeople then began to ask Jesus to leave. They didn't want to have
any more of their animals destroyed.

They put more value on pigs than they did on Jesus, the Son of God
Jesus at once proceeded to leave that region.
He does not stay where He is not wanted.

The man who had been healed wanted to go with Jesus,
but Jesus sent him home to witness to his family and neighbours.